What is Bedpage? Is It Legit? What Does NSFW411 Think?

As the famous WWE wrestler, The Rock says, "It doesn't matter what you think!" Fuck yes! Our thoughts are subjective. But let's talk about what some people are saying in the comments.

If you take a walk over to Pleasure-Seeker, you will find a comment that states Bedpage is run by the FEDS. Oh, shit! 5'0! 12! The Elroys coming up, yall! That's a strong accusation. So for legal purposes, we will say this accusation is "alleged". I have no proof, but this is the word on the streets.

Is Bedpage.com legit? I guess it is. But let's dive into the website a bit deeper. Grab your scuba gear for underwater wet-pussy exploration...

Is This Classified Ads Sites the New Backpage Alternative?

Sheeeiiittt, Ion know. What I do know is that if you search up Bedpage.com on Google.com, you will see a bunch of sites claiming that it's the new backpage alternative. Backpage was seized by the FEDS, coincidentally, because women were selling pussy on there like it was going out of style. A prostitution haven. When we thought about Backpage, we thought about sluts, escorts, and prostitution. Backpage was bound to drown.

Backpage was supposed to have classified ads for regular shit like Jobs, Trades, Services, Rentals, etc. But people mainly went there to find sex in the Personals sections.

Bedpage is just the same, and the name 'Bed'page is a dead giveaway as to what people come here. Let me say this unequivocally. I don't know if prostitutes get on Bedpage, but there are strong suggestions they do. Why the site hasn't been shut down leaves me wondering if that commenter from before was correct in their assumptions.

However, I'm not Detective Gadget and this section is about the Bedpage review.

How Does Bedpage Work?

The entire site is probably one of the simplest classified ads I've ever seen. Anyone, literally, anyone can use the shit. I had no problems with navigation. Even Christopher Columbus could find his way through this site, even though he messed up when he bumped into America thinking it was India.

You can post an ad if you are a client looking to give some motherfuckers a massage. Easy. What I have a problem with is that Login/Signup page forces you to use a Google account. Again, that rings some CIA, Facebook monitoring bells inside me. And we know how Google is closely related to the government in sharing information. It seems if you have a YouTube, Gmail, or whatever Google product will be exposed to Bedpage. I am super-de-duper worried about that. Some people don't care though. Remember, this login/sign-in process is only valid for people wanting to post ads, not if you're looking for an ad.

The first feature on top is a City search feature. But you can't type in your small town like Harrison, Arkansas, KKK-ville. No sir-rie, your city has to be known, like Little Rock. That's the easiest way to see all the classified ads in that city.

Another way is by scrolling through the states where the majority of the major cities in that state will pop up. For example, in Nevada, there's Reno, Las Vegas, and Elko. Cities across Canada and Europe are available too.

Let me tell you something right quick. You will see other shit pop up like Automotive, Community, and Local Places. I gots to be real cha, man. No one is posting SHIT in those sections no matter where you click, unless it's somewhere like Los Angeles and even those posts are sparse. What I'm basically saying is no one cares about selling their fucking XBox on Bedpage. Wanna find a wooden cabinet for your new home? Take your ass over to Craigslist.

Here are the following sections in the Adult Classified Ads where there are tons of daily postings:

Each profile has the pic of the babe. A warning tells you not to give any money to a woman upfront before the meaning because they might be a scammer. Although you might think, wow, this is a no-brainer, and why the warning? Some dumb motherfuckers still fall for this Nigerian-type of scam. You think you're talking to a beautiful woman in a penthouse and it's a big, bugly dude living in a shack with no running water.

Though these sections do not have extensive profiles about the "masseuse", you can only gather information by what they post as a classified ad description. I have a feeling these bitches are looking for sex, but wouldn't put up a fight if you want a simple body rub. LOL! Imagine that for a moment. You walk through the door and the "masseuse" grabs some condoms and proceeds taking off her clothes and looks at her weird like, "I just want a massage'. Oh!

Worldwide masseuse, has cities from Europe to Canada

Very simple to use

Sexy women - if those pics are real

Allegedly run by the FEDS

No profile of any kind, the girl can put whatever she wants and lie through her teeth 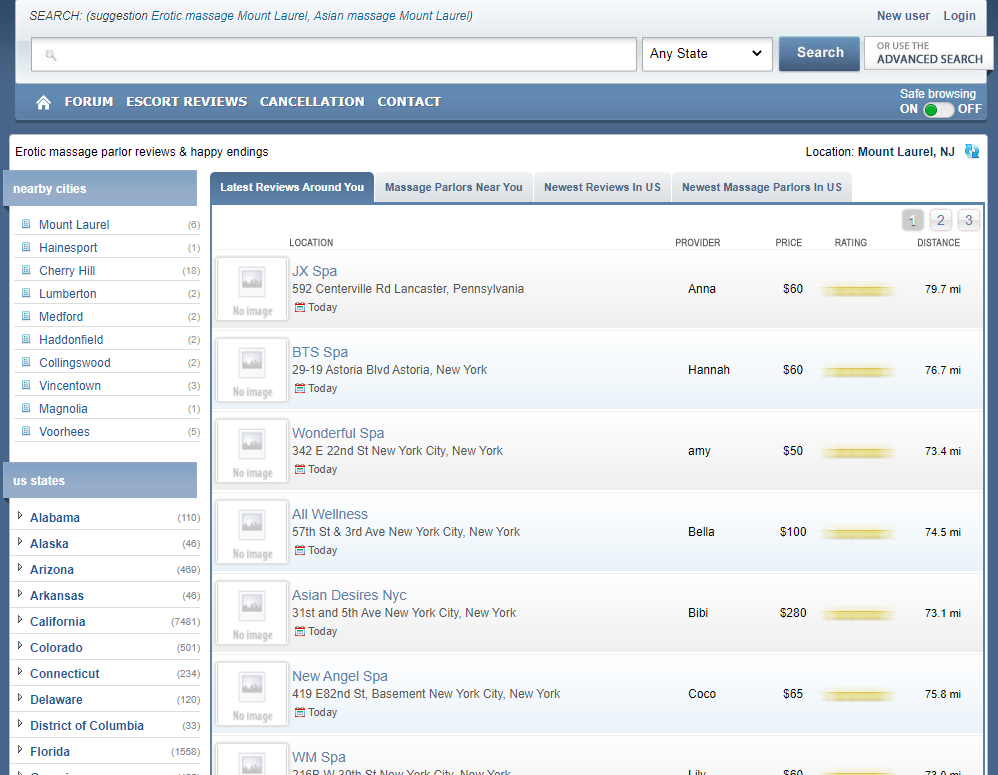 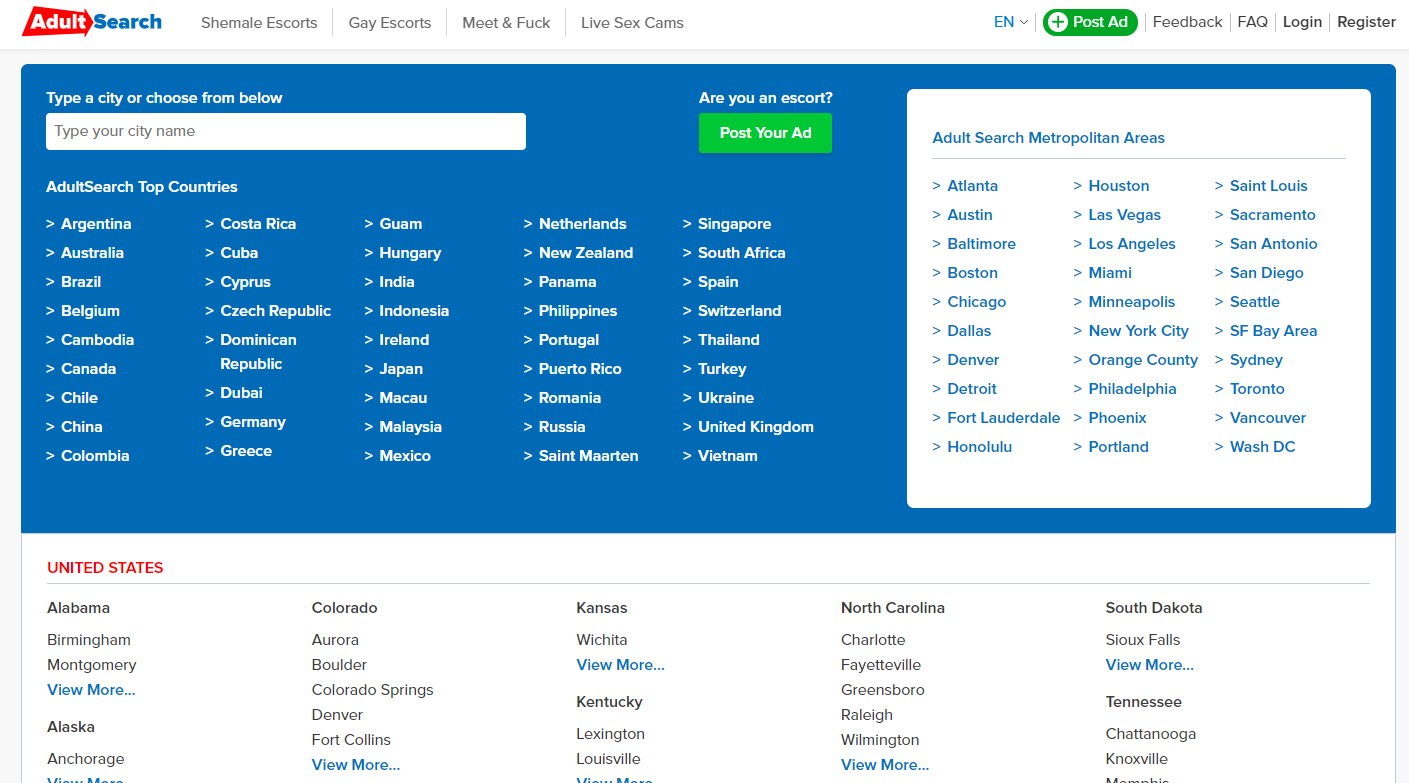 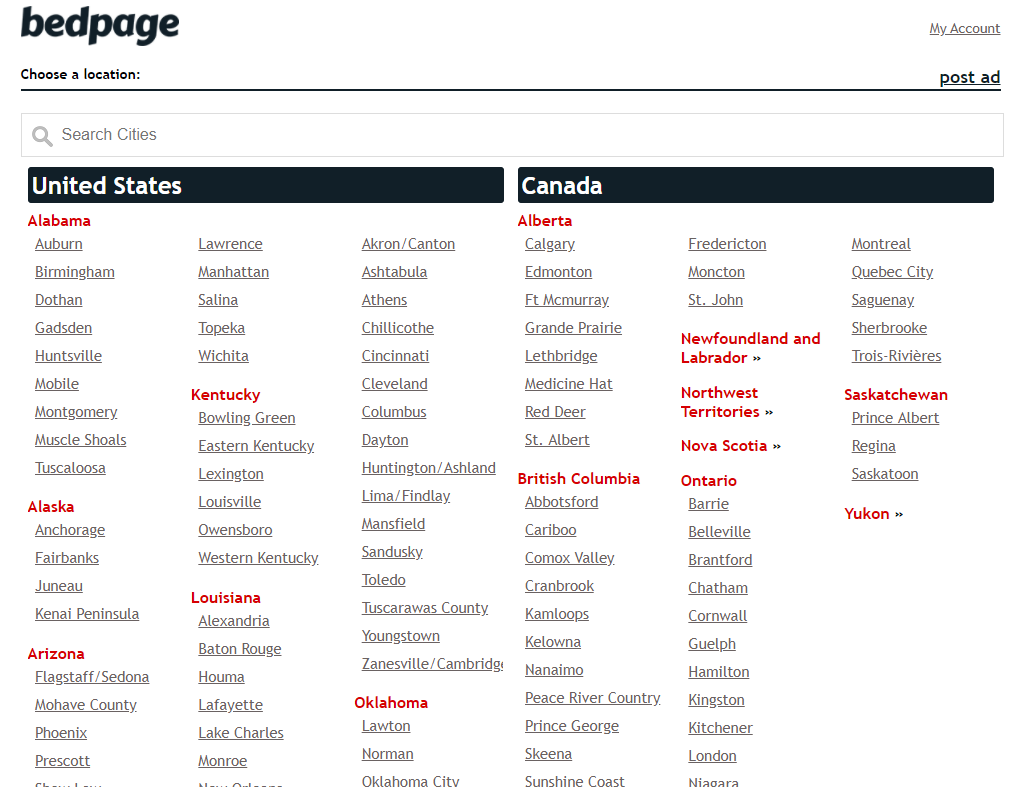