N/A
Get prepared to get blacked by the BBC Sluts sucking dicks six ways til Sunday on Reddit NSFW /r BBCSluts. BBC stands for Big Black Cock - something you don't have. It's basically a large penis on a big African-American body.

These BBC cocksters sling their one-eyed monsters around inside Lilly-white women, who look like they belong on an episode of the Brady Bunch - like they have never seen a black man in their gated suburban communities before.

167,000+ members enjoy what they see and 264 people are online on this lonely-ass Saturday night. I guess they have nothing else to do but watch hard cock and big knocks in action! Surprisingly, this group was created July 16, 2014 so they have put in a lot of work to get where they are. There are a lot of people (I wonder who they are) who likes to see BBC sluts engaging in interracial sex.

The rules to follow when posting anything to this subreddit group is very simple:

Must be a girl present in the video - No one wants to see a flash of your dick. They want to see a woman involved some kind of way. This rule seems to be strictly enforced.

No source requests - Don't even think about asking the poster where is the source of the video. You won't get it because they cannot post it or risk getting banned.

No incest - Apparently, no wants to see this shit, but, how will that get into a group like this?

No racism - Now you know there are some severely insecure white guys weighing like 300 lbs from eating food stamp-purchased foods while spending their loser existence on Minecraft and watching conspiracy vids about natural decline, who get jealous of black guys banging white women. They hate that shit in their souls and will talk mess until the cows come home! Sheeiitt, even when the cows come up they will talk shit to the death. Hoo-ray to this Reddit group for keeping that shit at bay!

Kik - The women in the video are not the ones posting the stuff. Some dumbasses can get confused by that and might comment, "let me get your kik, bb".

Only big ones - They only want the big dicks on there, no small or medium-sized ones. Just because a dick is bigger than yours does not mean it is a monster. Therefore, viewers get exactly what they came for - which is BBD.

Amateurs - They don't want the professional stuff, leave that for the birds, only at-home amateur stuff.

These rules give you an idea of what type of content is posted here.

Another good thing is the list of related subreddits like /r/bicuckold /r/bbcpersonals /r/her1stbbc and others you can visit.

This one has a chatroom which is cool as hell. Join and chat. Any time are a few thousand chatters. But, when Ii typed "hello" my text did not pop up in the chat box, so I have no idea what's wrong with the system.

Another website they advertise is the Best Sex Cam site that has a list of cam sites like Jerkmate, PornGeek, LiveJasmin, Chaturbate, and more stuff. Rad!

What surprised me, considering there are a lot of members and some online and daily video posts with a lot of views and a nice handful of upvotes, is not many people are commenting. I really wonder why...

Oh, I see why now. Some guys are saying stuff like "Natural Selection" in reference to a black guy banging a hot white girl. Then you got white girls talking about, "this is why I'm black only" and posting videos of themselves getting blacked-out on some black dick. Of course, comments like that invite the shit talkers! 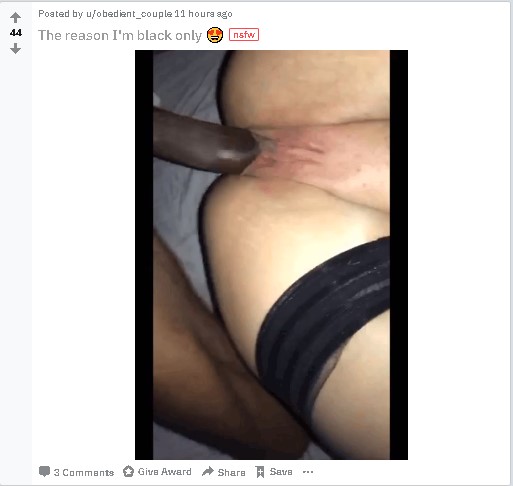 One guy posted his girlfriend fucking a black guy and a lot of guys seem to like it. Here is another comment from a different video "Turns out he's part black. He should be thankful he got black cock out of the mix." Wow!

Then you got a couple, and maybe it's the black guys, saying stuff like "Wishing it was mine." Oozing with jealousy. But you do got some guys who will give up props "Hot and nasty" and "Nice. You know he enjoyed that pussy."

Reddit has a bot that removes some of these posts. I really wonder what the messages are. You can only imagine the variations of the n-bombs being dropped. Below is your social proof of what I am saying. 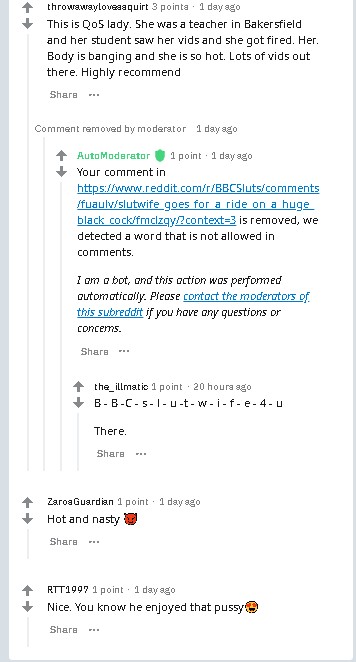 On the flipside, there are some black guys on there trying to rub it in the white guys' faces. Not cool, bro! One post says "she told me to fuck her because her boyfriend couldn't handle all that white ass." Come on, stop with the race baiting!

Blueprint for how to fuck your hotwife the right way

Reddit is one of the easiest sites to use

Good for first-time viewers who are curious about BBC fucking

No full length videos, although the community claims to have them - most only runs for seconds